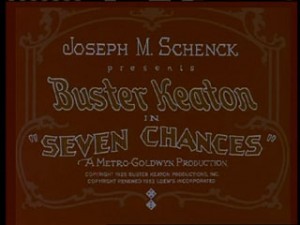 The movie begins with a plac­ard explain­ing that Buster’s char­ac­ter, a stone-faced gen­tle­man by the name of James Shan­non (who we’ll just call Buster), is in love with his sweet­heart, but can’t seem to tell her. The movie shows four quick scenes to illus­trate this point. The first one takes place on a sun­ny sum­mer day, with Buster and his girl (who I’m pret­ty sure didn’t have a name, which, if movies of this era taught me any­thing, was the style of the time) stand­ing in front of a nice white house. The girl is play­ing with a tiny pup­py while Buster ner­vous­ly tries to muster up the courage to con­fess his love.

The scene cuts to autumn. Buster and his girl are still in front of the house, only now the leaves have fall­en from the trees and the dog she has is slight­ly larg­er. Then win­ter. Buster and his girl are in the same posi­tion, stand­ing over a blan­ket of snow, with a large sized dog. Final­ly, in spring, Buster and his girl are STILL stand­ing there, only now the dog she is hold­ing is gigan­tic. Now, I’m pret­ty sure the dog is meant to indi­cate the pas­sage of time – ie – the dog was a pup­py in the sum­mer and grew to be a gigan­tic mon­ster of a dog by the spring. But, since it’s nev­er stat­ed, I per­son­al­ly like to think that the girl just gets sick of her dogs eas­i­ly and replaces them every time we see her. It’s more fun that way! Buster still hasn’t told her any­thing, which is total­ly under­stand­able, since sound hadn’t been invent­ed yet. Still, it’s prob­a­bly for the best. If Buster’s idea of a good time is to stand in front of a white house and look ner­vous, I think the girl could do better…

While Buster spends his off-time stand­ing in front of hous­es, his voca­tion seems to be as a shady, high-stakes hedge-fund man­ag­er. Now, most of us would find it hard to root for a hero with such a despised job, but we should remem­ber that this was before the cur­rent reces­sion, and, indeed, before the Wall St. col­lapse of 1929, which caused the Great Depres­sion. In 1925, I imag­ine, shady, high-stakes hedge-fund man­agers were looked at as pil­lars of soci­ety, lit­er­al­ly hold­ing our econ­o­my as it kept going up and up and up! (Lit­tle did they know that they were hold­ing up the econ­o­my with pop­si­cle sticks… but I digress…)

Buster and his part­ner, being the good shady, high-stakes hedge-fund man­agers that they are, have lost everyone’s mon­ey and look to face prison-time for the shady ways they lost it. The only way they can get out of this bind (which, I remind you, prob­a­bly cost many, many fam­i­lies their life sav­ings…) is to some­how get a lot of mon­ey. As they try to fig­ure out a way to weasel out of their predica­ment, a lawyer comes by, try­ing to speak to Buster. Think­ing that the lawyer is com­ing after him with a sum­mons (re: finan­cial­ly anni­hi­lat­ing people’s lives), Buster and his part­ner keep try­ing to evade him. This eva­sion seems to take up a good 10 min­utes (of a 50 minute movie) and ends with the lawyer sneak­ing into the exclu­sive coun­try club that Buster and his part­ner belong to (which I guess explains where some of the mon­ey went).

The lawyer doesn’t have a sum­mons, though. He has a will! Buster’s grand­fa­ther died, and Buster will inher­it 7 mil­lion dol­lars (which, due to infla­tion, would be the equiv­a­lent of 7 tril­lion dol­lars today) — but, due to his grand­fa­ther’s eccen­tric­i­ty or some pro­hi­bi­tion-era law I don’t under­stand, Buster will only get the mon­ey if he mar­ries a girl by his 27th birth­day… inside a haunt­ed house!* He was informed of this on his 27th birth­day, so, he rush­es to the girl he loves, and with the courage that only 7 mil­lion dol­lars can buy, he con­fess­es his love to her. When he demands that they get mar­ried that day, she tells him no and he slinks away. Now, this would have prob­a­bly been avoid­ed if he had just tak­en a half a minute to tell her about his grandfather’s will, but I’ll give Buster a pass because, once again, this is a silent movie and that sort of expo­si­tion is hard to mime.

After he blows it with the girl he’s actu­al­ly in love with, he spends the day try­ing to get any old girl to mar­ry him. He tries sev­en dif­fer­ent girls (thus the name of the movie), plus many, many oth­er girls as well (so, real­ly, this movie could have been called Nine Chances, Sev­en­teen Chances, or Sev­en Hun­dred Chances and it would have made the same amount of sense), but all of the women tell him no. Prob­a­bly because he was so stone-faced when he asked them. A smile goes a long way, Buster!

How­ev­er, when word gets out that he stands to inher­it so much mon­ey, an army of gold-dig­ging women crawl out of the wood­work to mar­ry him… and when it’s implied that he won’t mar­ry them, they quick­ly grab a bunch of bricks and decide to kill him. Fair enough.

To be hon­est, most of this movie before this point was kind of bor­ing. The only parts that I thought were inter­est­ing were the rosy racism, sex­ism and anti-Semi­tism that they pep­pered in. In one scene, Buster sidles up to a woman to woo her, but notices at the last sec­ond that she’s read­ing a Hebrew news­pa­per. A Jew?!? Buster slinks away, and I am hon­est­ly sur­prised that they didn’t have her smell the mon­ey with her giant Jew nose… The very next scene, he sidles up to anoth­er women, wear­ing a babush­ka-type thing over her hair, which cov­ers her face. He is about to (silent­ly) turn on the ol’ Buster-charm, but she turns her head and he sees that she’s black! Yipes! So… there’s some­thing for every­body! Then there’s the ques­tion of his sweetheart’s manser­vant. Short­ly after she rebuffs Buster, she asks her manser­vant to deliv­er a note to him that she’s changed her mind. This manser­vant was obvi­ous­ly a white guy in black guy make-up. I hes­i­tate to call it black-face, because I think of black-face as an over-the-top den­i­gra­tion, played for laughs… but this por­tray­al was… kind of under­stat­ed. Maybe black guys were hard to come by back then? Or, the more fun pos­si­bil­i­ty is that Buster’s sweet­heart forces her white manser­vant to look like a black per­son (and if she replaces her dog every sea­son for a big­ger one, this fits per­fect­ly with her eccen­tric char­ac­ter!). But again, beyond these moments, it is a snooze-fest.

Once Buster starts run­ning for his life from hun­dreds of women (which, due to infla­tion, would be the equiv­a­lent of mil­lions of women today), this movie becomes awe­some. Buster is a freakin’ ath­lete, y’all. Look at his legs pump when he runs. It’s lit­er­al­ly a blur! He jumps this giant chasm and con­tin­ues run­ning at full speed when he lands. He falls off this cliff in a way that makes it look like the ground was made of rub­ber. Buster did all his own stunts. Watch the boul­der scene and be amazed! Unfor­tu­nate­ly, the chase scene is just the last 15 min­utes of the movie, so you have to go through the dol­drums before you get your reward. Or… I can just post these high­lights I found on the Inter­net. Enjoy!